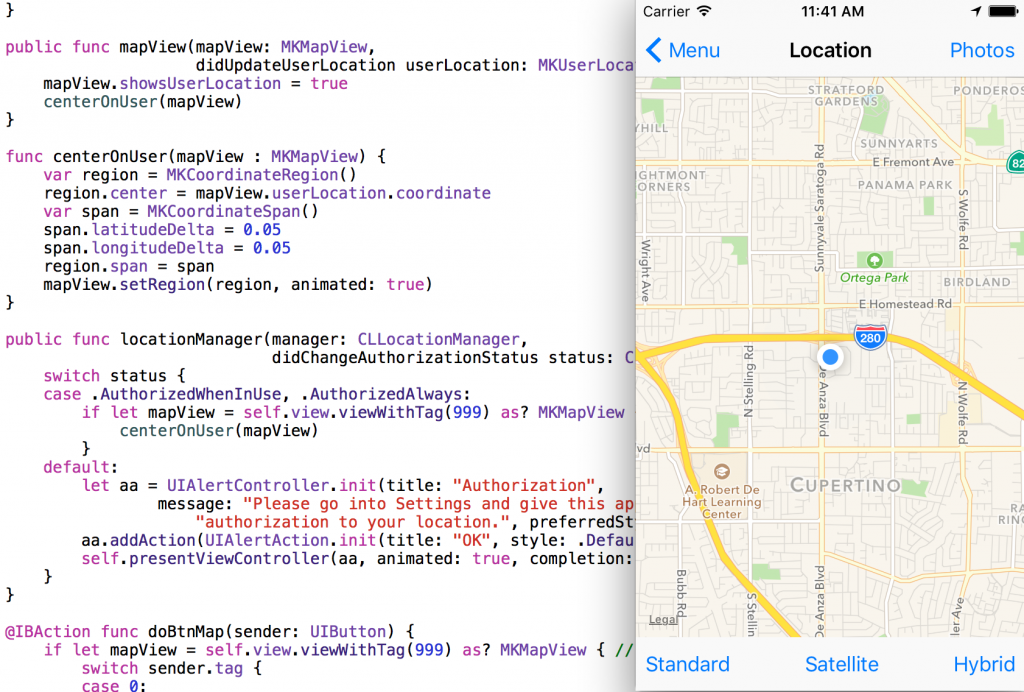 As I mentioned in another extension post, I dig them…when they make sense. I tend to do simple map stuff a good bit and wanted to write an extension for it.

Swift: Handle Location and MapView Updates with Extension on UIViewController

Some steps are important to do in order. However, after you’ve done this you might see that it could make sense to add the code after adding step 2 above.

Go to your project Capabilities and turn on Maps: 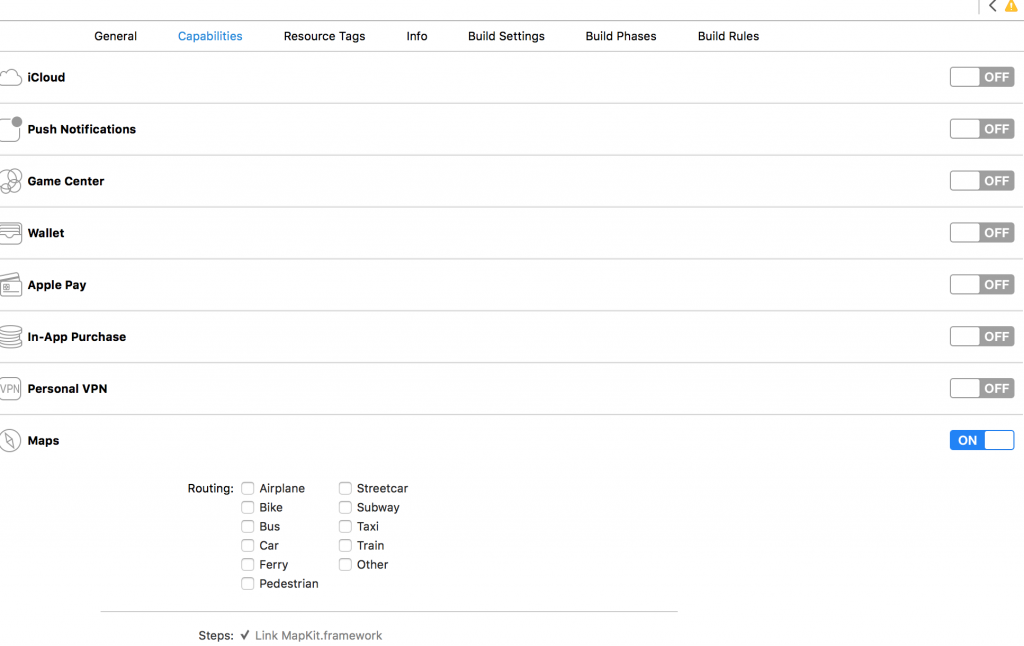 This adds the MapKit.framework to your project. You could do it manually, but… oh, well.

While you’re around there, go to the Info tab and  add a new entry for NSLocationWhenInUseUsageDescription. Make the value whatever you want (descriptive and not snarky).

Of course, your view controller in the UI needs to have its class set to whatever class you are defining in the code. In my example code below my class name is MapVC.

In the MapView’s attributes, set the tag to 999.

We’ll come back to the UI, but let’s get to the code now.

First we’ll create the extension file (⌘+n) as an iOS>Source>Swift file named whatever you want.

More on that later when the code is ready, but… meanwhile…

The showUserLocation function sets the delegate on the location manager and then either requests authorization for location (‘when in use’ you could use ‘always’) or starts the map view displaying the user’s location.

If the user needed to be prompted for authorization, we have this code to handle their response:

If the user approved, it finds the map view via the tag and calls centerOnUser passing in the map view. Otherwise, it informs the user it needs the location.

If the user did authorize, the map view will send location updates to the delegate (which we set to be self). The didUpdateUserLocation function calls centerOnUser with the passed in map view.

centerOnUser does just that with a span lat/long of 0.05 which is fairly close. You can change that to what you need.

If you want to allow the user to change the map type, you can use this action…

It changes the map type create three buttons (maybe on a toolbar) and set the tags on the buttons to be: 0 for Standard, 1 for Satellite and 2 for hybrid.

Set the action on the buttons (“Sent Action” for UIBarButtonItem or “Touch Up Inside” for UIButton) to be the doBtnMap: function above. More on that when we get back to the UI below.

There are other ways to do this same type of thing possibly with one button with tag 0 and increment it when it’s tapped (as long as you reset to 0 when the tag is 2).

To drop an annotation for a long tap (re: long tap gesture), use this code:

It finds the map view, removes existing annotations (except for the user’s location annotation), creates a new annotation from the tap location converted to a coordinate and adds it to the map view.

Going back to the UI in Interface Builder…

Drop a long tap gesture (from the Object Library) on the map view and set it’s action (drag from the empty circle under Sent Actions to the view controller icon (yellow circle w/ white square on the left of the image below)) select the handleLongTap: action defined in the code (above).

If you want the map type buttons you can create a toolbar or similar and set their tags. Set their Sent Action (UIBarButtonItem) or Touch Up Inside event (UIButton) to be the doBtnMap: action defined in the code.

Your view controller doesn’t need to do much. It has a map view property created when you dragged it… drug it… drugged it… that’s not right… when you did drag it into the code. 🙂

You need to create you location manager. And you need to call showUserLocation: at some point.

Your whole view controller class could be this.

I actually override the two methods: didUpdateUserLocation and handleLongTap to do some extra processing specific to this project. I call the super version in each case though.

So the full code for the extension is: