I found out yesterday that Parse.com offers crash reporting now. I love Parse.com and use it for many projects. It’s easy to integration and flexible in almost every way. It provides object database service, push notifications and more and with fairly low effort and low cost. No, I’m not a salesperson for Parse.com.

I used to use TestFlightApp.com for crash reporting but since their purchase by Apple, it seems you can’t add that functionality anymore.

Parse.com was purchased by Facebook, but I haven’t noticed any changes.

For Parse.com crash logs in iOS, it’s just adding one line of code: 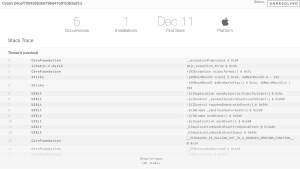 I did have to install the latest version of the SDK which had some changes (there’s a new ParseUI framework that you’ll need if you use their UI).

From there it was pretty easy to create a crash, relaunch the app and then see it on Parse.com.